The Nasoni: The Drinking Fountains of Rome

The nasoni are the characteristic Roman drinking fountains. Cylindrical in shape and 1.2 meters high, they are made of cast iron and the water is supplied by a curved torch with a central hole that mimics the appearance of a nose, hence their name.
In Rome there are 2,500 nasoni fountains, to which must be added the 114 fountains of the peripheral zones and areas outside the city limits, such as Fiumicino. There are 280 inside the walls alone, making Rome the city with the most drinking fountains in the world and the only one that offers its citizens this public service.

After all, the capital, also known as Regina Aquarum (Queen of the Water), has always generously distributed drinking water in the areas of thermal baths, monuments and fountains.
The origin of the nasoni dates back to after the unification of Italy, when the first mayor of Rome, Luigi Pianciani, had them installed in the capital between 1872 and 1874 to quench their citizens’ thirst and to vent the water network. They all have the same shape as described, except for the three oldest fountains which are located in Piazza della Rotonda near the Pantheon, on Via della Cordonata and Via di S. Teodoro and which are equipped with three spouts ending with a dragon-faced mouth. 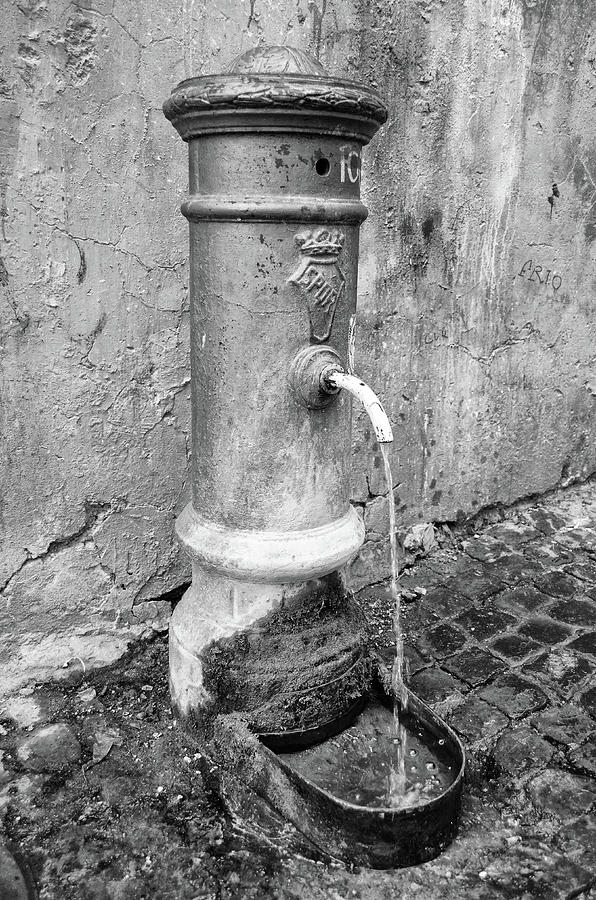 Even the classic noses have some variations. They are found with the inscription S.P.Q.R., with the fasces, with the Olympic circles and also with the inscription Acqua Marcia to indicate the aqueduct of origin. In fact, the water from these public fountains is excellent; 97 percent derives from springs and 3 percent from wells and is always extraordinarily fresh.
In the 1980s, to avoid wasting water, circular spring taps were installed which, however, made drinking more difficult. Unwelcomed by the Romans who broke them, they have never been replaced.

Recently, again with the aim of eliminating waste, the mayor, Raggi, proposed to shut off the water supply from the nasoni, causing a wave of popular outrage. It was pointed out that the water from the nasoni fountains constitutes only 1% of that supplied in the capital and that the waste depends on the poor maintenance of the city pipes that would lose about half of the water transported during the journey. In addition, the public water supply keeps the pipes under pressure, avoiding serious damage to the city water network, also allowing continuous flow in the sewer pipes, avoiding stagnation, and bringing benefits to hygiene.

But not only. The nasoni constitute the only water supply of the local markets, they are also used to water the urban gardens and are a source of supply for those families who cannot afford to buy bottled water, not to mention the children in the park, the elderly, tourists and even our four-legged friends, especially during increasingly hot summers. According to numbers and statistics, more and more people in Rome live in extreme poverty and homelessness, to which must be added the gypsy families and young foreigners that camp at Tiburtina Station. In short, the fountain is the only source of supply for drinking, washing and cooking for ten thousand people without homes.

Two maps have been dedicated to the nasoni fountains and their precious public service, one by Acea and the other by the publisher Innocenti, the latter is also connected to an app that signals the nasoni closest to where you are.There is even a play written by Fabio Morgan and directed by Leonardo Ferrari Carissimi titled The Nasoni Tell – History Has a Long Nose. It is a narration in which the fountains are observers and guardians of popular stories of archaic Rome, now disappeared, and of contemporary stories of the suburbs.