The Church of St. Clement in Rome

The Church of St. Clement is one of the most interesting religious buildings in Rome and is located a few steps from the Colosseum. The visit requires a descent through four different architectural layers from up to 2000 years ago and reaching 20 meters below ground. It’s not unusual considering that the visible archaeological part of Rome corresponds to only a small 10% of the archaeological remains of the city.
Perhaps it is precisely because of this descent along increasingly ancient, buried and secret layers that Sigmund Freud defined Rome as a psychic city.

It starts from the Romanesque Upper Basilica of St. Clement, with its beautiful quadriporticus, built in the twelfth century and dedicated to Pope Clement, the fourth pope including St. Peter. 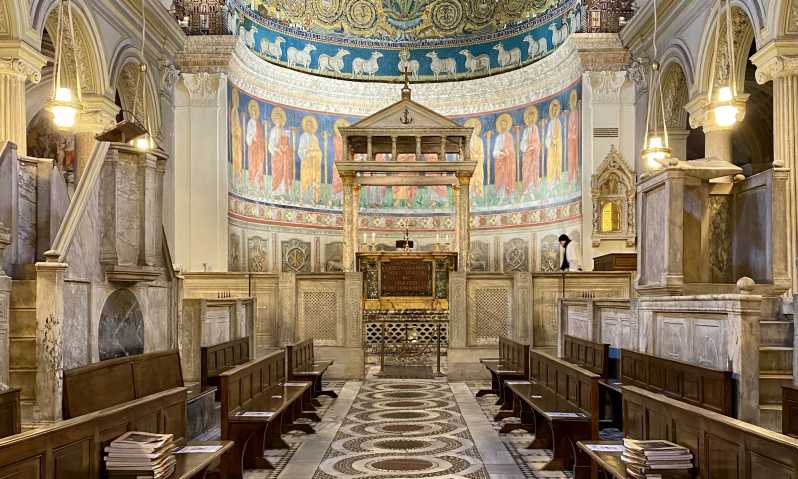 Divided into three aisles, it is full of extraordinary treasures spanning several centuries: the grandiose mosaic in the apse, the Triumph of the Cross, one of the most beautiful and important of the medieval era; the tomb of Pope Clement, whose body was brought back to Rome by Saints Cyril and Methodius, located just below the apse; the tomb of Pope John II, decorated with finely carved columns that come from the church below; the chapel of St. Catherine of Alexandria with the famous fifteenth-century frescoes on the life of the Saint made by Masolino da Panicale but in which some critics also recognize the work by Masaccio; the Schola Cantorum built in the 12th century with materials from the 4th century from the lower Basilica; the splendid eighteenth-century ceiling in painted wood and stucco, the Baroque interventions made by Fontana and the Cosmatesque floor.

Through a staircase, you reach the level below occupied by the great basilica of the fourth century. It had arcades and colonnades partly now incorporated by the foundation walls of the upper church and was used as a place of worship for seven centuries and therefore is rich in artistic and architectural testimonies from different eras. 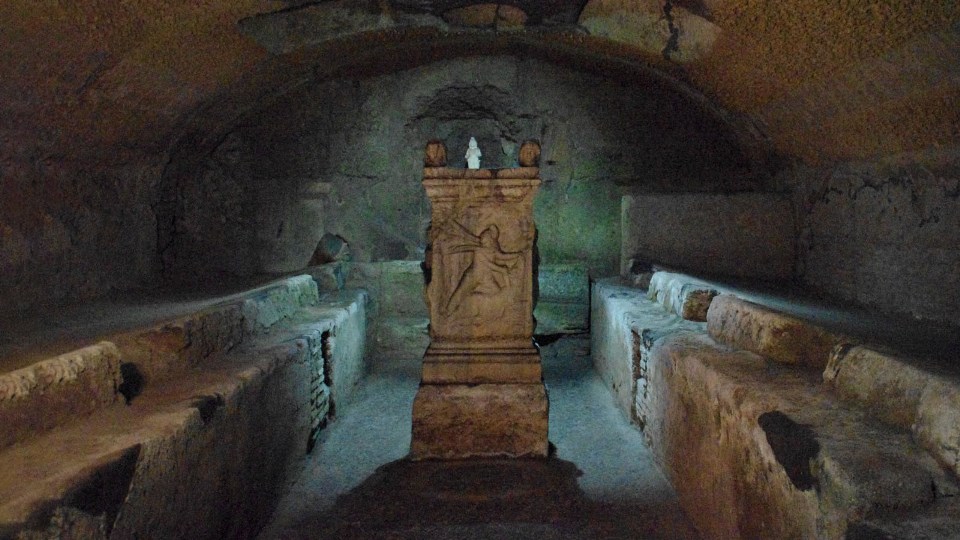 The beautiful floor dates back to the sixth century and is made with pieces of colored marble from every corner of the Empire: Greece, Egypt, Tunisia, Spain and France.
The fresco of the Madonna Regina dates back to the eighth century and the frescoed room where St. Cyril is buried, who was evangelizer of the Slavic world and inventor of the Russian alphabet, called Cyrillic, dates back to the ninth century.
The church is also credited with the legend about the motherhood of Pope Joan, who rose to the papal throne from 853 to 856 pretending to be a man, with the name of John VIII. Legend has it that during a procession, the woman was seized by labor and transported to the Church of St. Clement where she gave birth to her son, thanks to the relationship with a cleric, her secretary.

The Cartoon Ante Litteram in the Frescoes Dedicated to the Miracles of St. Clement

Among the frescoes of the lower Basilica are those dating back to 1100 dedicated to the representation of the Passio Sancti Clementis. On the top is the depiction of the pontiff officiating in a church where, among the faithful, is Theodora, converted to Christianity. Her husband, the prefect Sisinno, angry with the conversion, orders to capture and beat Clement, but God prevents him by blinding Sisinno and his men (Gosmario, Albertello and Carboncello). They believe they are taking Theodora and Clement away, but they actually drag heavy columns away. Sisinno incites his men with advice and bad words, in an inscription between Latin and vulgar that looks like a real cartoon commenting on the painted actions. He tells them: Fili de le pute, traite, Gosmari, Albertel, traite. Falite dereto co lo palo, Carvoncelle! (Sons of bitches, pull! Gosmario, Albertello, pull! Carvoncello, push from behind with the pole) and Clement replies in Latin: Duritiam cordis vestri, saxa traere meruistis (Because of the hardness of your heart, you deserved to drag stones). 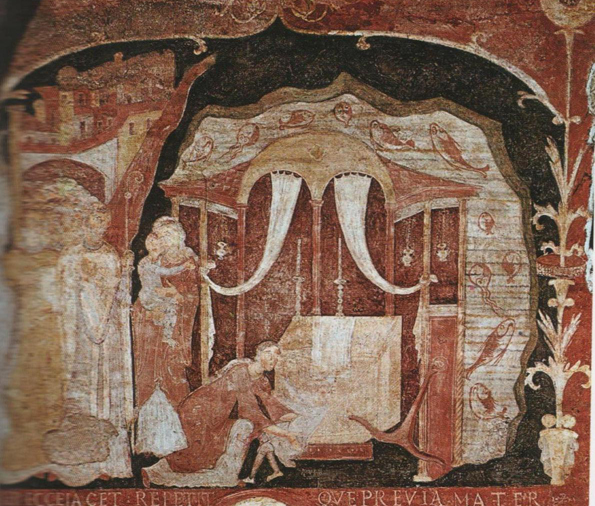 The language is popular and vibrant, precisely because the story was understandable to everyone.

The Remains of the Roman Era and the Mithraeum

Going lower and lower through a narrow staircase that leads to the basement, you arrive at the most ancient remains, those of the Roman era, and precisely the courtyard of an insula (a condominium) from which you enter an environment dedicated to the cult of Mithras, a Persian deity, destined to redeem mankind and to ensure their salvationThis cult was intended only for men, provided for seven levels of initiation and was very popular among soldiers, slaves and gladiators (we are, in fact, very close to the Colosseum).
The meetings dedicated to worship took place in a cave, because the god, according to some aspects in common with the Christian tradition, was born in a cave on December 25th.
The altar is still present where the image of the god who kills a bull is carved, whose blood spilled on the earth favors the birth of new life. On the side, there are stone benches where the initiates sat and consumed the ritual banquets. 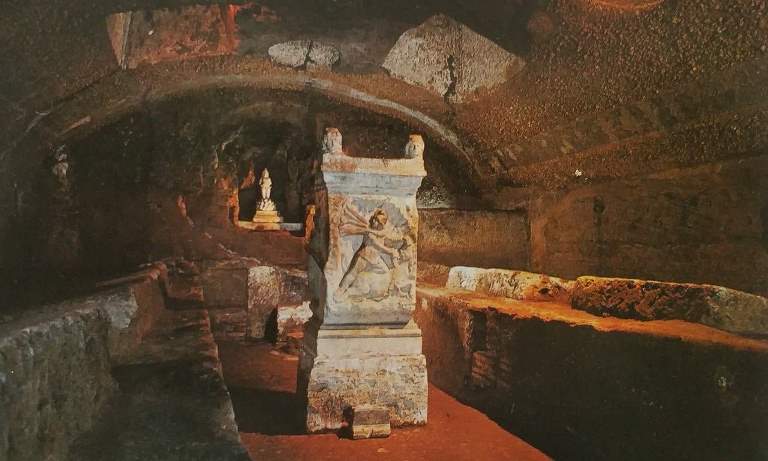 In the fourth century, when Christianity became the most widespread religion in the empire and thanks to the freedom of worship sanctioned by the edict of Constantine, the basilica was built over the pre-existing architecture, but the Mithraeum was not abandoned; it remained available for pagan worship until the edict of Theodosius, when Christianity became the only legal religion.
Next to the Mithraeum is the Mithraic school where the initiates followed the teachings of the cult and passed the tests. The rooms were originally all frescoed but unfortunately, only a small but beautiful fragment remains, which portrays a male figure with great realism.
Walking along a narrow alley, you come to a large Roman house. Even in these rooms, the walls were frescoed and the stuccos on the walls are still visible. You can also see the water source that once filled the lake of Nero’s Golden House, where the Colosseum now stands.

Even lower is access to a fourth level, consisting of the rooms of a house dating back to around 50 AD, destroyed by Nero’s fire in 64 AD. Here, in fact, archaeologists have found large quantities of ashes and burns in the walls of the building.
But the excavation works are not finished. At the level of the upper Basilica, other parts of ancient buildings are coming to light, such as the cemetery created in the floors and walls of the basilica, the huge baptismal font of four meters in diameter, nearly a swimming pool, or the splendid marble floor of the ancient papal bath.