Recognized as a UNESCO World Heritage Site since 1980, The Last Supper is one of the works that has received more attention in terms of studies, shots, interpretations and restorations, both because it represents the summa of Leonardo’s studies, but also because it is one of the masterpieces of the Renaissance.

Commissioned by Ludovico il Moro for the Church of Santa Maria delle Grazie in Milan, it was created on a small wall of the church’s refectory chosen by the duke to celebrate the prestige of the Sforza family. Il Moro in the same period had, in fact, commissioned Bramante with the embellishment and expansion of the building. On the wall in front of The Last Supper is the crucifixion of Donato Montorfano, completed in 1495, to which Leonardo then added the details of the portraits of the dukes of Milan with their children, unfortunately scarcely visible today. 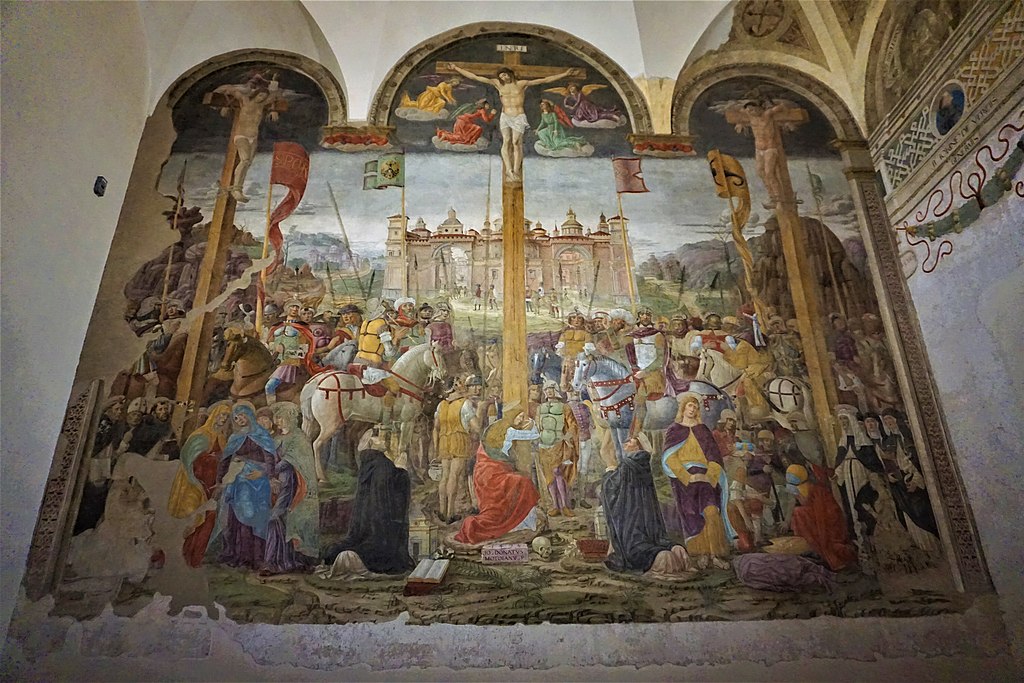 Made between 1494 and 1498 (in the latter year, Fray Luca Bartolomeo de Pacioli, a religious, mathematician and economist, described it as complete), it gave Leonardo some relief from economic worries and constituted the work in which he poured all the knowledge learned in previous years.

The painting measures 460 by 880 centimeters and was made with an experimental technique, which was also the cause of its early deterioration. Leonardo did not like the fresco technique because it needed a certain speed in spreading the colors on the fresh plaster, while he preferred small, tone-on-tone brushstrokes for greater chromatic richness and to better render transparencies, light and details. Above all, he loved the second thoughts that the traditional fresco technique could not have allowed him.
He therefore opted for a technique similar to that of painting on wood, creating a rough coat, on which he spread a layer of white lead to bring out the brightness of the colors.
We have a precious testimony about his way of painting from the nephew of the prior of Santa Maria delle Grazie, Matteo Bandello, who would later become a famous writer and novelist of the sixteenth century. He described how Leonardo was able to spend the whole day, from early morning to late evening, scaffolding with the brush in hand, even forgetting to eat and drink; other times, instead, he gazed and reflected on his work for hours without putting his hand to it, or he gave only a few brushstrokes, and then went elsewhere.

When finished, the work looked almost like a Flemish painting, full of details, as Leonardo’s contemporaries note, because the painting aimed to show the truth of things and feelings. The pewter plates reflect the colors of the apostles’ robes, the wine glass is realistic and even the embroidery on the tablecloth is like still life. Although the restorations have tried to make them better, many details have been lost. 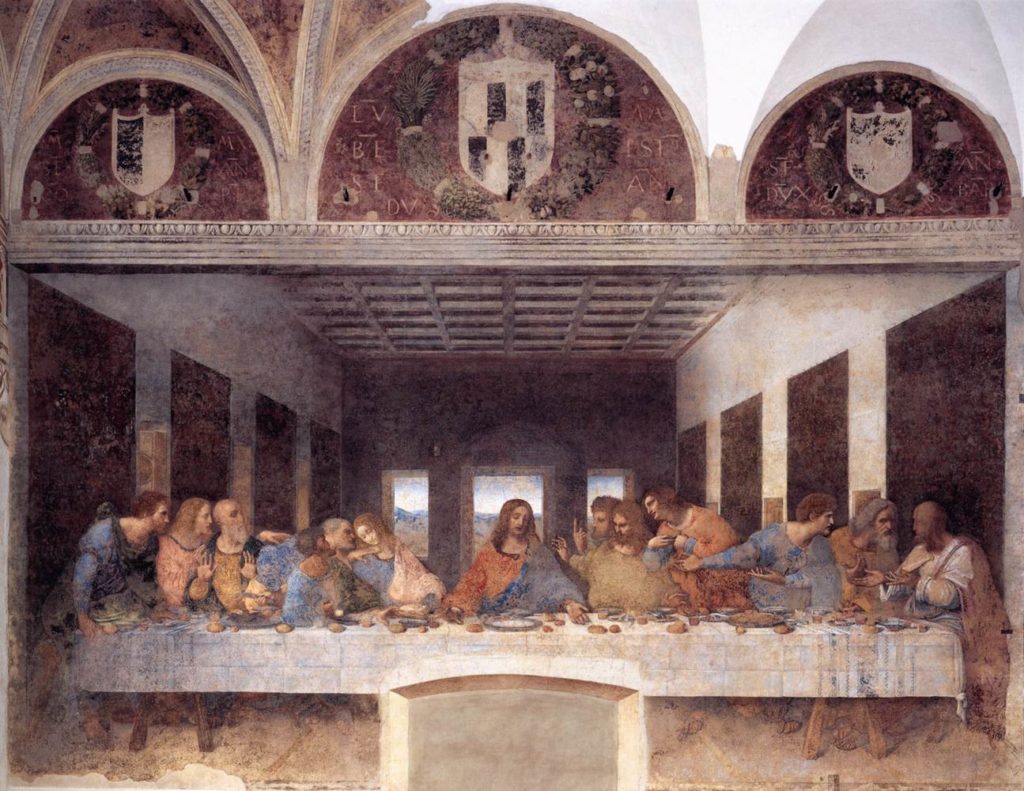 The painting is an almost theatrical representation of a specific moment of the Last Supper.
It is four meters high (in ancient times it was six, but then the refectory floor was raised) because Leonardo adhered to the Gospel description that the Last Supper took place on the second floor of a building. So, it is as if he had eliminated the refectory wall to let us see the room on the second floor, a box defined by the coffered ceiling, the tapestries on the walls and the windows in the background that show an undefined sky and landscape, and to help us witness what happened. The table is the proscenium where the action takes place.

The story is taken from the Gospel of John, and it is the moment in which Jesus says to his apostles: Truly, truly, I say to you, one of you will betray Me. In the painting, Jesus still has his mouth open and a lowered gaze as he has just finished pronouncing that sentence, generating a series of emotional reactions and great agitation among the apostles.

Leonardo resolves the description of that dramatic moment by representing them seated at the table, not one next to the other, but grouped into four groups of three and on everyone’s face is the amazement for the words of Jesus is evident. Everyone talks or gesticulates excitedly because they feel called into question (is it me?). In the first group on the left are those who raise their hands, those who ask the apostle seated farther away for something, touching him on the shoulder to draw his attention. Judas is in the second group, who is shown to the side, Peter is in the middle, who holds the knife in that much talked about unnatural pose and who says something in John’s ear with controversial feminine features. On the right, there are those who ask by raising a finger (Thomas who pokes that same finger on Christ’s side to verify his identity after the resurrection), those who spread their arms almost in disbelief and the last group is turned away, the apostles talking to each other, increasing Jesus’ isolation.

When it reaches him, the wave of movement stops. In fact, he is alone, in the middle of the composition. Motionless, with his arms outstretched on the table, one hand with the palm facing up to indicate bread and the other open over a glass of wine. Simultaneously with the announcement of the betrayal, Leonardo found a way to represent the institution of the Eucharist.

In the tradition of the cenacles that Leonardo knew well, Judas is always placed behind the table, with his back towards the observer. Leonardo instead welcomes him in the midst of all the other apostles, but after hearing the sentence that upsets everyone, Peter bends over to John to suggest that he ask Jesus if he is the traitor and in doing so pushes Judas forward who overturns the saltshaker (a gesture of terrible ill omen in all Mediterranean countries) with the arm whose hand is still grabbing the bag with thirty silver coins. Judas is welcomed at the table with the other apostles, but the expedient of Peter’s gesture excludes him from the wave of movement and emotion that involves all the others.

The fame of the work spread immediately and reproductions and engravings flock everywhere. There is even one in Canton Ticino, which is interesting and useful because an inscription below shows the names of the various apostles, while Leonardo has left us no indication in this regard.

The Decay and the Restorations

As soon as the work was finished, Leonardo himself already noticed that the painting showed a small crack in the lower left part. The serious deterioration of the work had been attributed to the unconventional technique used by the artist, to the humidity of the environment caused by the kitchen vapors and also to the exposure to the North. But in reality, there were many episodes that had caused serious damage to this precious masterpiece, last but not least being the various careless carried out restorations.

In 1517 Antonio de Beatis, secretary of Cardinal Luigi d’Aragona, wrote referring to the work: it began to spoil. In 1566, Vasari described it as a dazzled spot. At the beginning of the seventeenth century, Federico Borromeo noticed the collapse of various pictorial parts and called Vespino, a painter who was at his service, to make a copy on canvas because he doubted that the work could be saved.

In 1652, the monks opened a door between the kitchens and the refectory to create a direct entrance between the two rooms to avoid going through the cloister. They broke the wall and defaced the painting, eliminating the lower part and the feet of Jesus, of which only the studies remain. Not only that, but the hammering to open the entrance caused many fragments of paint to collapse. Giuseppe Bossi, painter, sculptor and art collector linked to the Brera Academy, noticed this in the nineteenth century.

In the eighteenth century, the painting was further damaged, with good intentions of restoring it. Michelangelo Bellotti was in charge of the recovery in 1726 and a few years later, in 1770, Giuseppe Mazza. They act in varying ways, even washing the paint with corrosive to revive the colors, actually creating further damage.

With the arrival of Napoleon Bonaparte, the convent was seized to become the headquarters of the troops. At first, the refectory was preserved, because among Napoleon’s advisers were both Giuseppe Bossi and Andrea Appiani, a neoclassical painter, also linked to the Brera Academy of Fine Arts. They advised the emperor not to let anyone into the refectory, a suggestion that Napoleon turned into a decree that he signed with his own hand. But later, needing space, the troops invaded the upper room and turned it into a stable. Not only that, they vandalized the work by playing darts on the heads of the apostles with bricks. This event caused scandal among the Brera professors. In particular, Giuseppe Bossi and Giuliano Traballesi cleared the refectory. The French, out of an excess of fervor, bricked up the entrance, so much so that to access it you had to go down a ladder from the monks’ ambon. Once again, the Brera professors convinced the invaders to turn the cenacle into a museum with a concierge appointed to open only for visits. The cenacle also survived thanks to this initiative.

In the nineteenth century, with the advent of new restoration techniques, two groups of scholars were created, one who wanted to tear the painting from the wall, the other who supported a simple cleaning. The second group prevailed, and cleaning began which soon turned out to be a dramatic solution because the color disintegrated. It was then tried with the tear, with even more disastrous results, and at that point the restorers gave up.

After the controversy between D’Annunzio, who wrote the Ode for the death of a masterpiece in 1901, and Luca Beltrami, architect and restorer of the Sforza Castle and the Sala delle Asse, that tradition attributes to Leonardo (but which was not a real restoration, rather a repaint), a new intervention was decided. Luigi Cavenaghi, in charge of the restoration work, opted for a series of resins and glues that should fix the color and give some shine.

In August 1943, Milan was bombed and the Church of Santa Maria delle Grazie was hit in full force. Miraculously, both the Last Supper and the Montorfano fresco remained standing, while the rest of the refectory was destroyed.
The news triggered a great solidarity: soldiers from Veneto arrived to protect the two paintings with military cloths to at least prevent them from water and the Dominican monks also rushed from Bologna to help the Milanese brothers until the refectory was completely rebuilt. 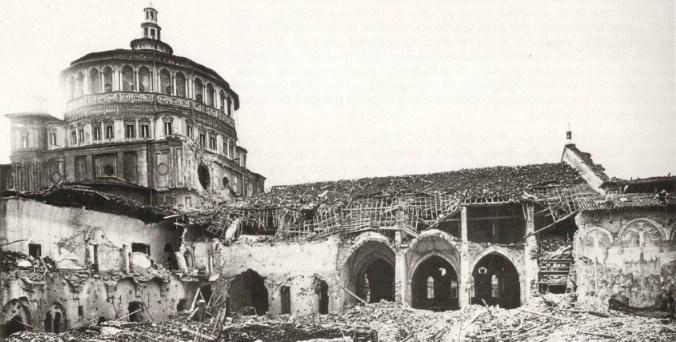 Then Mauro Pelliccioli, a great restorer of the fifties, intervened on the Last Supper, but he reconstructed it in his own way: where there was no color, he added it, completing the figures and making beards grow where there was nothing.

It so happened that one of Pelliccioli’s young students, Pinin Brambilla Barcilon, a very talented restorer endowed with infinite patience, in 1977 accepted the task from Olivetti to restore the masterpiece by Leonardo, a restoration that ended only in 1999. Olivetti financed the work with 7 billion lire and never failed to fulfill its commitment, even when the company was about to shut down.

The restorer studied everything there was to know about the damage, the previous restorations and the techniques used. She bravely removed everything added, looking for Leonardo’s original draft and her long work remains a beautiful professional and human testimony in the book My life with Leonardo.

Today the cenacle can be visited, but to preserve it and allow the public to admire it, only in small groups and for a maximum of fifteen minutes, as it represents a challenge for restorers and art historians who use the most modern technologies to preserve it to be able to hand it over to future generations.